Flatness and The War

the underside of one of John F. Ohmer’s large outdoor paintings, click for link

when you think of him

doing his military service in the Eiffel Tower

you know how wonderful the 20th Century

Before Koons built his studio into the proto-Foxconn of painting and before Warhol rounded up a cadre of speed-freaks to sweat over silk-screens in his factory, there was John F. Ohmer.  Ohmer was almost certainly the most prolific landscape painter and installation artist of the 20th century.

At his peak he commanded hundreds, if not thousands of other artists in some of the largest-scale paintings and mixed-media installations in history. Ohmer’s prodigious career lasted only a mere three or so years in the mid-40s, during which time all his work centered on the question of flatness–how the flatness of the photographic image affected the flatness of the painted canvas. This single, all-consuming question prefigured a similar turn in aesthetic theory a decade later. Ohmer’s work was never collected, publicly or privately,  and it’s entirely possible that none of the paintings he worked on even survived the decade in which they were made. I cannot find a single published photograph of the man.

Better known as Colonel John F. Ohmer of The United States Military, Ohmer was responsible for camouflaging various military bases and war-time factories from photographic aerial reconnaissance on the West Coast during World War II. Among other efforts, Ohmer enlisted the help of Hollywood set-painters to paint giant tarps with bird’s-eye view illustrations of suburban and rural townscapes to be placed over any visible military-industrial compounds. Viewed with the naked eye, up close or even at some distance, the illusion is obvious, but when captured by an aerial photograph, the coverings appear (even to our CGI-jaded eyes) surprisingly realistic. aerial photograph of the concealed Douglas Airbase (bottom half of photo)

Ohmer’s camouflage works by deceptively combining a technological feature of photography with one of its contingent social meanings. On the one hand, Ohmer’s work took advantage of a fundamental technological truth about the camera, namely that it’s mono-focal. Photographed objects are rendered in perspective but by a single lens and onto a flat 2D surface. The effect is that the space around and between things looks squashed, especially in cases like aerial shots where the depth of field is very shallow. At the same time for Ohmer’s paintings to work as camouflage when photographed, he had to assume that despite the apparent unreal flatness of any aerial photograph with a shallow depth of field, the enemy still believed in the literal truth of such photographs. This is worth pointing out because this belief in the so-called “reality principle” of photography–that it reproduces reality– is just that, a belief; it isn’t a technological fact of a photograph but  a contingent meaning we ascribe to the outcome of its technological facts. Some studies have shown that cultures that are uninitiated to photographs don’t immediately believe in their indexical truth value, while the advent of digital photographic manipulation has seriously eroded even our own faith in their truth. But if Ohmer could count on the Japanese’s belief in the literal truth of photography (and the very existence of their aerial reconnaissance program would have given him reason to do so), he could reliably use the flattening effect of photography to his advantage.  That is, as long as the Japanese expected aerial photographs of on-the-ground reality to look flat no matter what, that “reality” could be simulated with an equally flat painted canvass. Ohmer added some three-dimensional props to his tarps, like shrubs and rubber cars, but these were accents to a painted picture that had to be convincing in its own right.

underside of another tarp

The believability of Ohmer’s paintings rests on the peculiar fact that one medium can, literally, cover-up the shortcomings of another. I think this adds an interesting term to a contemporary dialog in media studies around what’s called “remediation”. In 2000, media theorists Jay David Bolter and Richard Grusin coined the term “remediation” to describe what happens when one medium incorporates and reworks the strategies of another, usually older, medium. For example, when a videogame borrows a trope from noir cinema (e.g. L.A Noire). Bolter and Grusin go on to argue that digital media does this either in an attempt to prove itself as more capable of the embedded (redundant) medium or to borrow some of the referenced medium’s nostalgic charm. I think the above story about Ohmer can illustrate another operation of “remediation”: that the embedded medium (here, painting) can absorb and be elevated by some of the formal characteristics of the embedding medium (here, photography). This is another way to understand the illusion of Ohmer’s camouflage: the flat painting absorbs the reality principle of the flat photograph that captures it and therefore presents as real. Our means of understanding nestled media is such that we instinctively attribute the formal principles on display to the “last” medium, to the one we are engaging with directly. Think about how we look at a black and white photograph of something, even if we have never seen the depicted object before we are trained not to assume that it is actually black and white, but rather that the medium’s limitations have rendered it that way. Exception: when I was a kid, I asked my mom for a black and white dog like Lassie.

The critic Roland Barthes recognized something like this when he wrote in Camera Lucida (1980) that our naive belief in the trustworthiness of photographs “innocents” a photograph’s contents. Instead of “a chain is only as strong as its weakest link” the principle is something like “a chain is only as strong as its last link”. The contemporary artist Clement Valla has produced a series of images, Postcards from Google, which revisits this paradoxical effect. Valla has collected various instances where Google Earth has tried and failed to reconcile  satellite photographs of a contoured surface like a hilly road or a suspension bridge onto a 3D terrain map. Google’s problem stems from those that Ohmer tried to exploit: there is no good way to reproduce height/depth from a single bird’s-eye view photograph.

Clement Valla, from Postcards from Google Earth, click for link

The British actually came up with an ingenious solution this problem during World War II. Under the code-name Operation Crossbow, British pilots conducted a series of photographic reconnaissance missions over Nazi occupied territories, but instead of taking one photograph of each site they took two, offset to partially overlap. The two images were then recombined to form a single “3D” image in a way similar to how 3D movies are processed today. The resulting images allowed the British to accurately spot the protrusions of German V1 and V2 rockets saving untold lives. 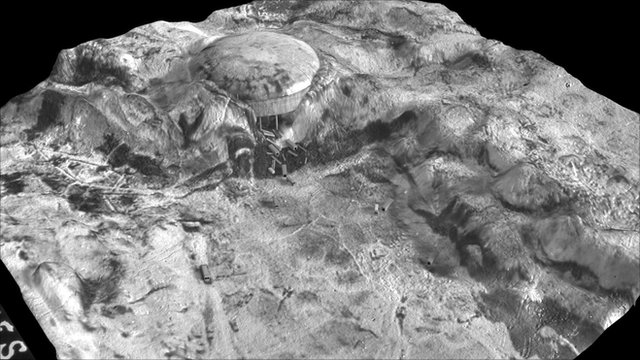 It may sound strange to call this a story about wartime photography, because we usually reserve that term for the work of photographers who make war their content in some obvious way. In this case, I’m barely even talking about photographs perse: from the lost experiments of Civil War Balloonists to the Japanese who never actually flew missions over California, the photographs I’m interested in are essentially theoretical ones. But I think this is exactly what lets us get closer to the real stuff of the history of photography, because this history  both precedes and exceeds any given image, it’s about wrapping our heads around bigger questions concerning the historical production of forms and meaning.

Check back next week for the second part of this series where I’ll explore the accidental rediscovery of camera-less photography in the War’s dark conclusion.