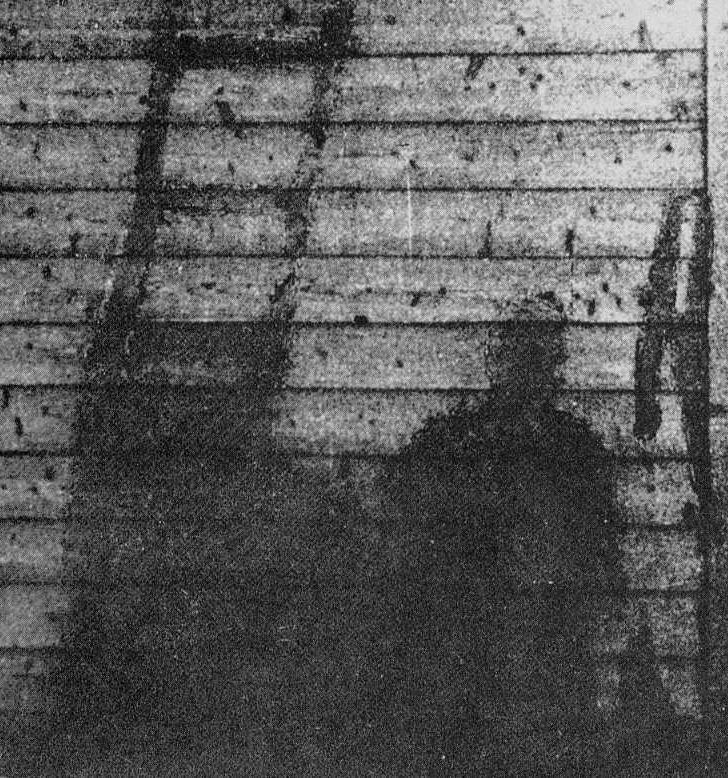 Below are some early notes for an article I intended to write about the atomic explosion at Hiroshima whose radiation burnt a shadow of the city, at the moment of detonation, into various surfaces.  Documentary photographs of the city after the explosion show the spectral imprint of a farm’s picket fence on the scorched fields, of a resident crouching on concrete steps; there is one (above) of a man aside a ladder, reportedly a house painter, blackened into the wood slats of a home.

I’ve decided to abandon this writing project because after I began I realized there was no respectful way to go on answering the questions I posed in my research. Theodor Adorno said there couldn’t be poetry after Auschwitz, I never agreed with this (later in life even he recanted), but I’ve come to the conclusion that there can be no art criticism about Auschwitz. The French film critic Serge Daney came to a similar conclusion in his article “The Tracking Shot in Kapo”. Written with an uncanny mix of lucidity and nostalgia during the final months of his life, the article reflects on an image from an obscure movie about the Holocaust, called Kapo, that Daney has only read about, that he has never seen–that he refused to see his whole life. The shot in question is a slow, elegant tracking shot across an electrified fence onto which one of the characters, Riva, has just thrown herself on to commit suicide. Daney insists that there are some events so horrific that they ought to only be seen through a kind of refusal of sight. Daney doesn’t mean that some events simply cannot be photographed, but that they must be photographed without the sort of obvious aesthetic pleasure, what he calls the “pornographic” quality, of the tracking shot in Kapo. As an example he cites a post-War Japanese film, Ugetsu, in a passage which is worth quoting at length:

In 1959, Miyagi’s death in Ugetsu literally nailed me, staggered, to the seat of the Studio Bernard theatre. Mizoguchi had filmed death as a vague fatality that you were able to see could and could not not happen. One can remember the scene: in the Japanese countryside travellers are attacked by greedy bandits and one of them kills Miyagi with a spear. But he does it almost inadvertently, tumbling around, pushed by a bit of violence or by a stupid reflex. This event seems so accidental that the camera almost misses it. And I am convinced that any spectator of that scene has the same superstitious and crazy idea: if the camera had not been so slow, the event may have happened off-camera and – who knows – may have not happened at all…Shall the camera be to blame? By dissociating the movement of the camera from the movements of the actors, Mizoguchi did the exact opposite of Kapo. Instead of a petrifying glance, this was a gaze that “seemed not to see”, that preferred not to have seen and thus showed the event taking place as an event, ineluctable and indirectly. An event that is absurd and nil, absurd like any accident and nil like war – a calamity that Mizoguchi never liked.

Rereading the Daney now, I’m struck by how often he mentions the tragedy of Hiroshima. Here it’s in his oblique choice of the violent post-War Japanese film Ugetsu; earlier, he lingers on the famous line in Resnais’ Hiroshima, Mon Amour, when the French protagonist’s Japanese lover tells her despite all her intellectual knowledge of the disaster, “You saw nothing in Hiroshima, Nothing.” Daney meant this as a lesson for filmmakers, but I feel as if it applies equally to those who make the images and those who look at them. This blankness before a photographic image of incomprehensible violence now seems like the only appropriate critical response. It doesn’t mean we shouldn’t look but it means that we are naive, and worse, cruel to think we understand.

-medium not film but world-out-there, in literalization a metaphor for photography’s effect onto real world; site specificity, only photograph that can’t be copied, moved?

-not a photograph, but a negative for photographs to be made from?

-Historical Avant-garde (rayograms)–cameraless photographs/negatives were a way of removing mediation- establishing that photography was not a technological process but above all else a chemical process of Exposure–act of being photographed is the act of being assaulted by light, extreme form.

-photographic negatives what is happening is play of absence and presence– that a thing is only captured by documenting where it is absent…negative space (negatives), this contradiction especially with atomic photograph where the subjects were both made present and absent by the radiation (“taken” as in a picture and as in by death). marking through absence?

-what is a photograph that immortalizes as it kills?

-an act of violence that automatically documents itself? more or less ethical form of war photography?